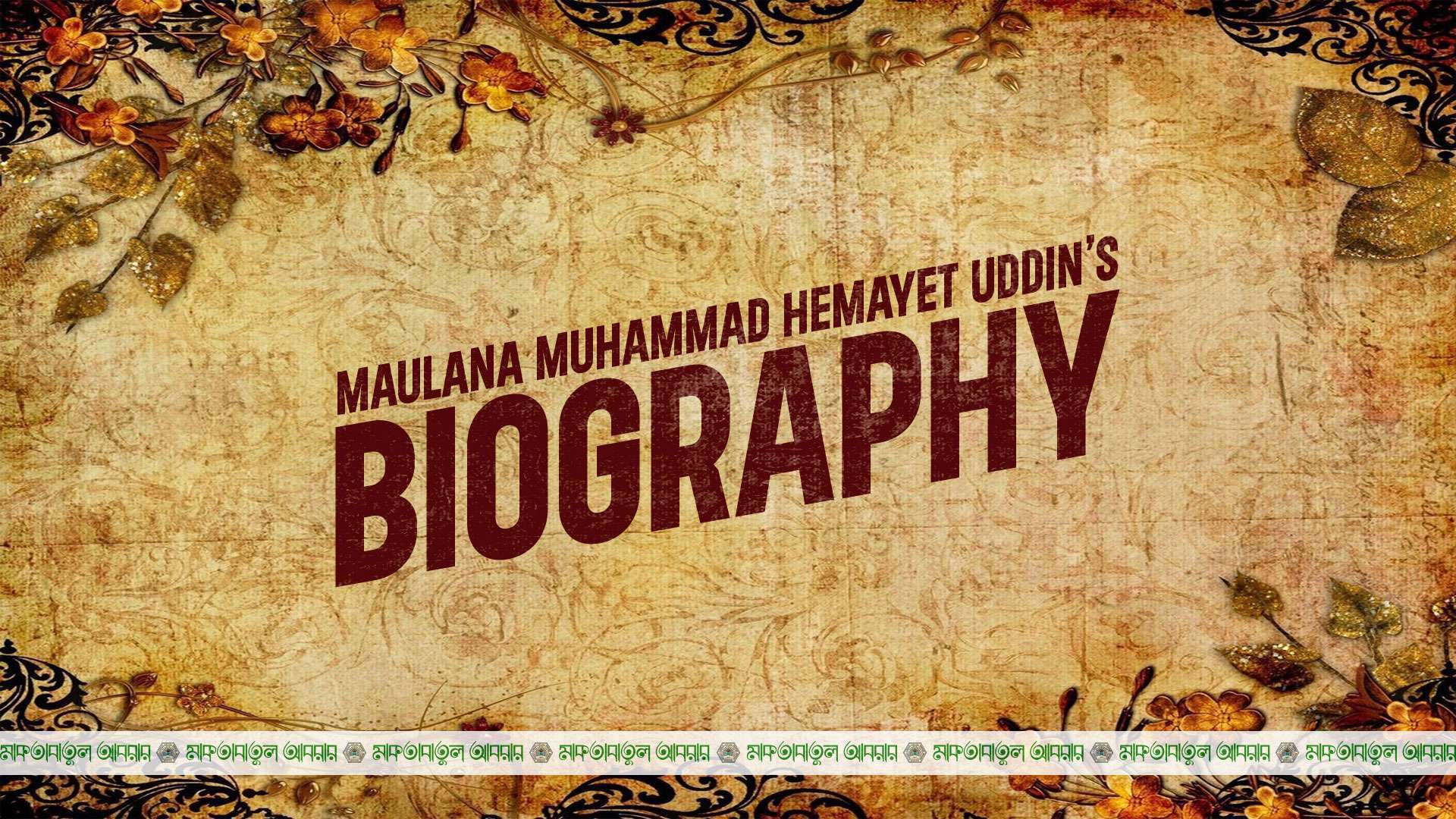 The famous Bangladeshi writer and researcher Alem (Islamic Scholar) Maulana Muhammad Hemayet Uddin was born in October 1960 in the village of Maishaghuni under Rupsha police station of Khulna district in a religious family.

After completing his primary education in the school, he completed Hefj in 1976 from Nurul Uloom Hafezia Madrasa, Gallamari in Khulna district.

He studied for one year at the Central Madrasa Darul Uloom in Khulna district, five years at the Central Madrasa Gowhar Danga Khademul Islam in Faridpur and four years at the Malibagh Jamia, a traditional educational institution in Dhaka. In 1986, he passed Takmil class from Malibagh Jamia. In the year 1987, Takmil class was re-launched in Darul Uloom Deoband, India, the traditional school of the Muslim world. He placed 1st in the Central Examination of Mutawassitah (Nahbe Mir) and Sanabiyyah Al-Ammah (Kafia) Jamaat, Gawhar Danga Befaq and 2nd in the Central Examination of Fazilat (Meshkat) and Takmil (Daoraye Hadith) Jamaat, Befaqul Madarisil Arabia Bangladesh.

After graduation, he served for many years as a senior Muhaddis or Shaykhul Hadith in Malibagh Jamia Dhaka; Jamia Madania Baridhara, Gulshan, Dhaka; Jamia Madania Rajfulbaria, Savar; Jamia Subhania, Uttara Dhour, Dhaka and Islamia Madrasa, Islampur Dhaka. From  2010-2011 academic year to the present (2022) He has been serving as the Senior Muhaddith and Mushrif of Tafsir department in Jamia Islamia Darul Uloom Madania (Jatrabari Bara Madrasa).

Since his graduation, besides teaching, he also served as the Imam and Khatib of Baitul Atiq Jame Mosque (Chapra Masjid) in West Nakhalpara, Dhaka for 23 years (1987-2009).

He specializes in Islamic psychology, Islamic geography and mapping, and Tarjama and Tafsir of the holy Quran. He also has special skill in interpreting dreams.

He is a reclusive seeker of knowledge. Away from all political activities and movement-oriented activities, he devoted himself exclusively in teaching, studying, researching and writing. He has written in Bengali, Arabic and Urdu.

He has been involved in writing since his student days. Hundreds of essays written by him during his student life are included in the Islamic Encyclopedia published by the Islamic Foundation of Bangladesh.

His Islami Akida o Bhranto Motobad (The Islamic Beliefs and Misguided Doctriness), Islamic Monobiggan (Islamic psychology), Islami Bhugol (Islamic geography) and Fiqhun Nisha are included in the syllabus of many educational institutions. The book Islami Akida o Bhranto Motobad (Islamic Beliefs and Misguided Doctrines) has been approved by Befaqul Madarisil Arabia Bangladesh and has been nominated as a collaborative syllabus on the return of Fazilat (Meshkat) Jamaat. His books Ahkame Zindegi and Fazail Zindegi are taught in many mosques and Ahkamun Nisa in many gatherings of women. His books are appreciated by the scholars of all walks of life, including the educated society in Ulama and General Education.

Among his books published so far (as of January 2022) are:

In the awakening of the inspiration of knowledge and science

Some of his writings continue to play a role in reforming Muslim society. At one time in our society there were misleading books like Maqsoodul Muminin and Neyamul Quran in learning all the Islamic rules and regulations. The book ‘Ahkame Zindegi’ written by Maulana Hemayet Uddin Sahib with all kinds of rules and regulations of life is now taking place in every house and conveying the correct knowledge about all the faith-aqeedah, muamala muasarah, masala masayel of worship and moral character. At one time in many mosques of the country, the narration was completed by saying something like a story. The statement of the mosque would not have been discussed in the way that Islam has given direction to all aspects of life. As a result, people were unaware of many aspects of life. In order to remedy this condition, he wrote a book titled ‘Bayan O Khutba’ for the purpose of Imam and Khatib. This book called Bayan and Khutba is completed in 3 volumes. It contains all kinds of statements to discuss throughout the year and all aspects of life. The book has reached the imams and khatibs in the mosques. Al-Hamdu Lillah Many mosques in the country are now discussing all aspects of life, subject-based systematic discussions.

Has formed an international invitation organization. The activities of the company are ongoing. Currently the work of translating and composing books in the following 10 international languages is in progress.

0
No products in the cart.